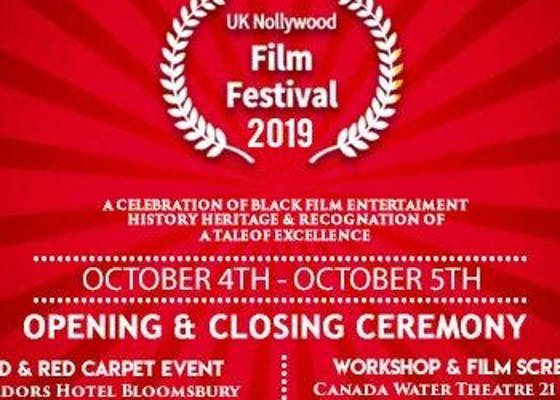 “UKNFF IS PROUD TO BE CELEBRATING THE TALENTS WITHIN THE NOLLYWOOD INDUSTRY!”

The Festival will screen multiple selected films from across the world over two days with special workshops at different venues.

The UK Nollywood Film Festival otherwise known as UKNFF is underpinned by the vision of the UK Nollywood Producers Guild to empower and showcase the work of independent filmmakers especially those from the African descent. UKNFF is dedicated to Africans and Supporters of African Filmmakers especially UK Nollywood. Even though all filmmakers qualify to submit their films, particular emphasis will be shown to the selection and screening of Nollywood films and films made by African youths or first and second time African Film Producers/Directors.

Lindsey Oliver CEO Yanga TV said: “Dramatic, rapid, sizzling and tense. That’s just a description of what it can feel like commuting around a big British city like London. Capture that backdrop alongside the colourful, extravagant, authentic storytelling of the Nigerian Diaspora and you have UK Nollywood.”

Marc Adebesin Publicity Director of UK Nollywood Producers Guild said: “We all need to support integration in Nollywood as this does not just happen without each one of us being fully involved.

I have a dream that one day Nollywood would be able to create global block buster’s just like Hollywood.”

The UK Nollywood Film Festival will present awards in the following categories:

Malcolm A Benson President of UK Nollywood Producers Guild added: “UK Nollywood Film Festival is an opportunity to showcase some of the works coming out of the industry, to also appreciate and highlight   the   resilience   shown   by   Nollywood   Filmmakers   and   other stakeholders in making Nollywood what it has become so far. As a community, we need to remember where we come from, how we started and look forward to   where   we   are   going It   will   take   discipline,   courage, consistency   and enthusiasm amongst other things to build an industry and even though it may seem farfetched, rough and rugged, it is by no means inevitable”