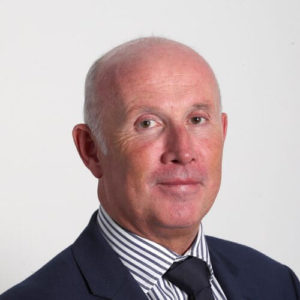 Mr. McGloin brings a wealth of experience in the mining and exploration industry to the Company. He was the Chairman and Chief Executive officer of Amara Mining as it progressed the Yaoure project in Côte d’Ivoire from discovery through to feasibility study and oversaw a growth in the resource base from 200,000 oz to over 6 million oz. Subsequently this project has gone on to be the cornerstone of Perseus Mining’s future growth following its acquisition of Amara Mining.

Mr. McGloin is a geologist and graduate of Camborne School of Mines and spent his early career as a geologist in Southern Africa before working across the continent within the mining industry and subsequently moving into consultancy. He joined Arbuthnot Banking Group following four years at Evolution Securities as their mining analyst. He is also the former Head of Mining at Collins Stewart. He has served as non-executive director on a number of mining and exploration companies listed in Toronto, New York and London. Mr. McGloin will relinquish all of his current roles except for his non-executive directorships of Perseus Mining Limited and Cornish Metals Inc..

Mr. Sybrand Van Der Spuy will assume the role of Chief Operating Officer responsible for the logistics, supply chains and security of the Company’s projects throughout Africa. Mr. Van Der Spuy oversaw the discussions resulting in the Company’s acquisition of Moydow Holdings, which will become the focus of the Company’s exploration and development efforts going forward.

Al Gourley, Chairman of DFR said: “We are delighted to have John as the new CEO of DFR. John is highly respected in the industry and has a strong track record of creating value through the development of mining projects in Africa. He has the right mix of geological, financial and management skills to lead the development of the highly prospective Labola project in Burkina Faso that DFR is in the process of acquiring.

“I would also like to thank Sybie for his contributions to DFR as CEO and look forward to continuing to work with him in his new role as we enter the next stage in the Company’s development.”

John McGloin said: “I’m excited by the opportunity that DFR represents and have a clear vision for how to incrementally build value through the development of the Company’s assets to create a new West African gold explorer.”

The appointment of John McGloin is subject to the approval of the TSX Venture Exchange.